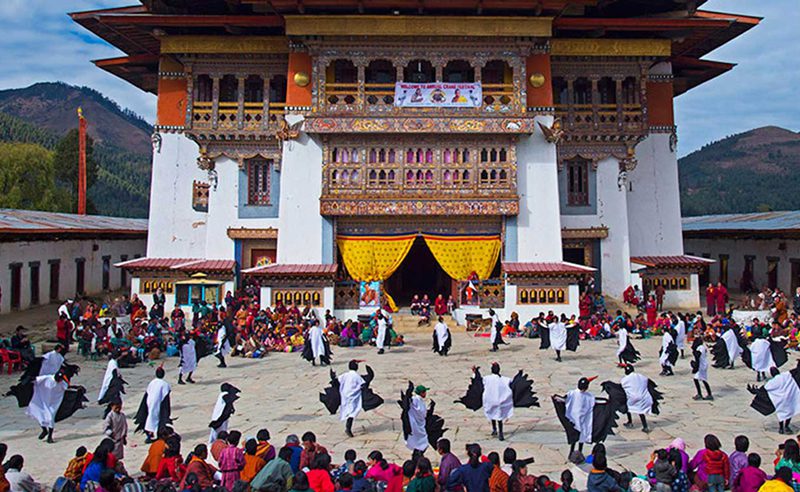 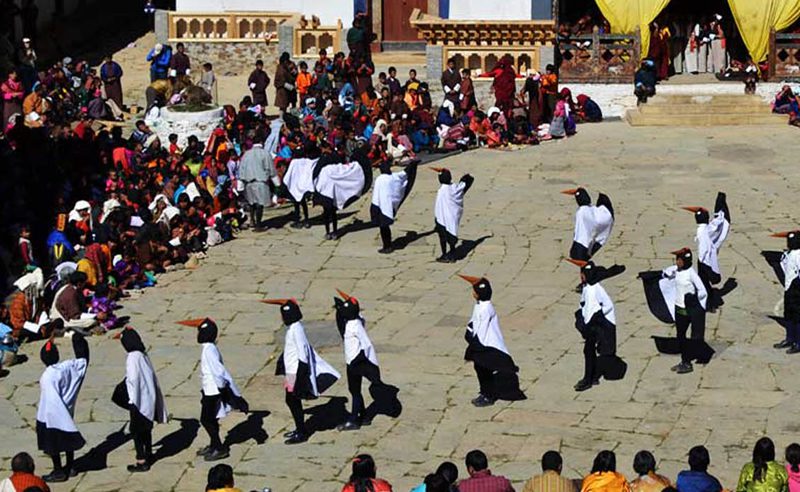 Black Necked Crane Festival is combination of sightseeing and attending the festival at Gangtey. The black-necked crane festival organized annually is to generate awareness on the importance of conserving these endangered cranes. The festival is celebrated with cultural programs with folk songs and dances (some with black-necked crane themes), mask dances performed by the locals, crane dances etc. It was first initiated in 1998 and has become part of the local culture in Phobjikha Valley. Besides, the tour also visits the colorful city of Paro, the tiny capital – Thimphu and the old capital – Punakha. Another great feature is the hike to the Taktsang Monastery perched in a hillside.

Day 01: Arrival Paro (2,250m) – Thimphu (2,350m)
Arrive Paro by the Bhutanese National Carrier (Druk Air) flying over the world’s highest mountains and finally landing at the lush green Paro valley. A cool and clean fresh air greets the visitor as stepping down from the plane, the first gift of Bhutan. After clearing customs and visa formalities, meet the representatives and the Bhutanese guide, and a short tour brief by the guide then transfer to Paro town for lunch.Then drive towards Thimphu (the capital of Bhutan) for about 1 half hours drive. En-route Thimphu, one can do a short hike to Tamchog Monastery, a private temple owned by the descendents of famous Tibetan bridge – builder Thangthong Gaylpo. Later on continue the drive to Thimphu.

In Thimphu, visit Buddha point for a stunning view of Thimphu city and Takin Compound- on the way to the viewpoint over Thimphu is the home of Bhutan’s national animal, the Takin. Then continue to Tashi Choe Dzong- the fortress of the glorious religion was initially constructed in 1641 and rebuilt by King Jigme Dorji Wangchuk in the 1960s, Folk Heritage Museum – a 300 year old traditional house converted into a museum, Centenary Farmers Market, the new authentic craft bazaar. Overnight at Hotel.(Lunch/Dinner included)

Day 02: Thimphu – Wangdue – Gangtey (2,900m)
After breakfast, drive towards Gangtey via Wangdue. The road climbs steeply through a forest of pine and cedar, festooned with hanging lichen high up near Dochula pass (3,050 m). This pass often offers panoramic views of the Himalayan mountain ranges in a clear day. After stopping for a tea, descend long a series of hairpin bends to the fertile valley of Wangdue. Short visit to view the Wangdue Phodrang Dzong dramatically located on the spur of a hill at the confluence of the Tsang Chu and Dang Chu rivers. Then a gradual climb goes into the valley of Gangtey (Phobjikha). There is an old monastery of Gangtey Gompa dating back to the 17th century. A few kilometers past the Gompa on the valley floor are the fascinating valley of Phobjikha. The gentle sloping hillsides of Phobjikha are described as “the most beautiful valley in the Himalayas”. Overnight at Hotel.(Breakfast/Lunch/Dinner included)

Day 03: In Gangtey – Attend the festival
After breakfast, join with the locals in their Crane Festival at the Gangtey Monastery; the monastery dates back to 17 th century. The valley of Phobjikha is well known as the winter home of the Black necked crane (Grus Nigricollis). Bhutan is home to around six hundred black necked cranes with Phobjikha being one of the popular places that the birds migrate to in the winter months from the Tibetan plateau. The elegant and shy birds can be observed from early November to end of March. Overnight at Hotel.(Breakfast/Lunch/Dinner included)

Day 04: Gangtey – Punakha (1,310m)
Today drive from Gangtey to Punakha which is about 3 & half hours drive. En-route take a short hike through beautiful rice fields to Chimmi Lhakhang, a temple dedicated to Drukpa Kuenley, who as a
favorite saint of the Bhutanese people is known affectionately as “the Divine Madman”. And Punakha Dzong located at the confluence of the Pho-chu (male-river) and Mo-chu (female-river), the Punakha Dzong is arguably the most impressive dzong in the country. Overnight at Hotel.(Breakfast/Lunch/Dinner included)

Day 05: Punakha – Paro (2,250m)
After breakfast, trace the route back to Paro which is about 4 and half hours drive. After lunch visit Ta Dzong. Ta Dzong, once a watchtower, built to defend Rinpung Dzong during inter-valley wars of the 17 th
century. It was inaugurated as Bhutan’s National Museum in 1968. Afterwards visit Rinpung Dzong Rinpung Dzong built in 1646 by Shabdrung Ngawang Namgyal, the first spiritual and temporal ruler of
Bhutan; the Dzong continues its age-old function as the seat of the district administration, district court and the monastic body. The southern approach to the Dzong has a traditional roofed cantilever bridge called Nemi Zam.(Breakfast/Lunch/Dinner included)

Day 06: Paro – Hike to Taktsang Monastery (3,120m)
Early in the morning, drive towards the base camp of Taktsang for the hike up to the Taktsang Monastery ‘Tiger’s Nest’. It’s about two hours hike up the cafeteria. From this point, enjoy the spectacular view of the monastery, where Guru Padmasambhava landed on the back of a tigress in the 8th century. Afterwards, hike back to the road point and drive towards Drukgyal Dzong, the ruined fort. This fort once defeated this valley from the Tibetan invasions during the 17 th century. Also visit the local farm house at Drukgyal to witness daily life of the Bhutanese people. Later on, drive to Kyichu Lhakhang one of the oldest and most sacred shrines in Bhutan. PM: Stroll around the main shopping district in Paro. Overnight at Hotel.(Breakfast/Lunch/Dinner included)

Day 07: Paro Depart
After breakfast, transfer to the airport to catch the onward flight. Bid farewell to the remote and legendary Dragon Kingdom disappearing again behind its guardian mountains.(Breakfast only included)

The tour cost depends upon the category of hotels used and as per the group-size. Normally we use government approved 3 star and above hotels. Please contact us for the trip pricing.